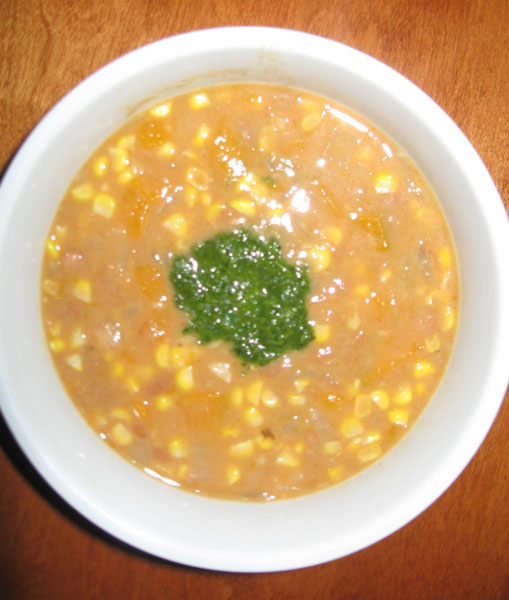 This quintessential autumn soup honors the indigenous peoples who introduced corn, beans and squash—the three sisters—to the early American settlers. Kabocha (the Japanese word for “squash”) is the sweetest-tasting squash and has a bright orange flesh. Buy the smallest one you can find so it’s easier to peel and cut. Cilantro-Lime Pesto adds a fresh green dimension to the soup, but if you don’t feel like going through the effort, add a sprig of parsley to serve.

1. To prepare beans, soak for 24 hours, drain. Bring to boil with 3 cups fresh water in a pressure cooker or 3-quart pot. Allow to boil uncovered for 5 minutes. Scrape off and discard foam that rises to the surface. Add bay leaf and kombu and cover to cook until tender, 20 minutes in a pressure cooker, longer in a pot.

2. Meanwhile, heat oil in a large skillet. Add onion, garlic, squash and salt and stir well. Add water or broth and cook until squash is tender, about 10 minutes. Add corn, corn “milk” (the flavorful juices that come out when, after cutting off the kernels, you scrape a knife over the cob in the opposite direction), chili powder, and cumin and continue to cook 5 minutes more.

4. To make Cilantro-Lime Pesto, place ingredients in a food processor and blend until smooth.

5. Serve soup topped with a spoonful of pesto placed in the middle.